Hey Guys,
I've done a few things to my Hewes over the past couple years so I thot I'd share some stuff. This one is a bit complicated cause it's a few mods in one.
I couldn't stand the blood and guts going down into the fish box so I changed it up. I added an aluminum angle lip around the top and replaced the cleaning station lid with a new piece of UHMW that goes over the transom so everything goes off the back and nothing gets into the box anymore. It also raised the station by 2" which helps too cause I'm pretty tall. And got rid of the latch that was a bit weird when trying to fillet a fish. I put some foam under the angle to try and insulate it from the boat aluminum a little too for fridge efficiency.
IMG_0324.jpg
While the box was out I took off the bubble wrap insulation on the outside of the box and cut some 2" foam that fits around it to insulate the box. I spray glued it to the box after it was back in and taped up the gaps. I haven't go to filling the voids with spray foam but it works really well already. This would be a great solution for the guys that were looking to have ice last longer in the box even without the fridge unit. A block of Ice lasts in there like a cooler now. I'm thinking of insulating the floor fish box like this for next year. You'll also see the extra deep cycle batteries I put in there to run the fridge from.
IMG_0326.jpg
Then I put a fridge unit in from "Nova Cool" if anyone is interested I can get the model of the one I installed. I put the cooling unit under the hatch by the transom door. It fit quite nicely and used some space I wasn't doing anything with.
IMG_0329.jpg
I mounted the cooling plate and the controls inside the box. I wanted to mount the plate to the outside of the box to keep the box clean and keep the plate away from the salt water but I was warned off that by the fridge guys cause the cooling is done by surface area and then you'd only have 1/2 the area (The side of the cooling plate touching the outside of the box). We put fish in there too sometimes so I have a couple bins for the snacks and drinks so they don't get fish slimed. The angle I added also left space for a 2" piece of insulating foam in the lid. It used to be attached to the cutting board, but has fallen off, and it makes a nicer seal now so I never reattached it.
IMG_0327.jpg
If I turn the controls up to 2 it's a nice cold fridge. like really cold. If I turn it up full it will freeze almost everything in it, anything in the plate end freezes for sure.

Overall it's been a really great addition! Nice cold Beer! Nice cold Fish! AWESOME on a weekend getaway.
You do not have the required permissions to view the files attached to this post.
Top 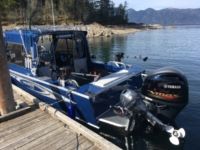 This is a great idea and you did a great job with a detailed post and pictures. I'm with you on the blood and guts from filleting fish pouring into the livewell. After your suggestion I'm at least going to investigate changing up the lid/cutting board on my boat. How much juice is your refrigeration unit using? I'm going to see if there is room to do the same on my boat.
2018 Hewescraft SeaRunner 190 HT
Yamaha 150 VMax
Yamaha 6YC Gauge
Yamaha 9.9 HT
Garmin TR-1 Gold, Trolling Autopilot
Lowrance Gen 3, 9 inch
Airmar TM185C - HW
Cisco Electric Planer Board Reels
Scotty 1106b Downriggers
Icom 424G VHF
Planar 44D Diesel Air Heater
Top

This pic is from a previous post on this forum by a member with an Adventure 290. You mentioned raising the cutting table 2" felt better to you. This modification plus your modification could allow someone to adjust the cutting table height to fit their needs. I'm doing something similar to your refir conversion. I really like your idea, Thanks for posting.
You do not have the required permissions to view the files attached to this post.
Top

Wallyfish; What glue did you use for the UHMW and did you supplement the glue with screws. What thickness did you use for the main cutting board? It looks like you might have switched hinges from the original. If so, what did you go with? I am thinking about raising the height and increasing the size so all the blood and cuts go over the transom instead of in the live-well.
2018 Hewescraft SeaRunner 190 HT
Yamaha 150 VMax
Yamaha 6YC Gauge
Yamaha 9.9 HT
Garmin TR-1 Gold, Trolling Autopilot
Lowrance Gen 3, 9 inch
Airmar TM185C - HW
Cisco Electric Planer Board Reels
Scotty 1106b Downriggers
Icom 424G VHF
Planar 44D Diesel Air Heater
Top