This might help someone sometime. I had to cut the tongue off my trailer to get it into the garage when we moved back home to WA. Was going to do the swing tongue thing from Fulton but they are almost impossible to find right now in 3x3 online and wasn't going to pay $150 for one locally.

So, putting my Mechanical Engineering degree to work I made a sleeve tongue with the remaining part I saved from cutting. Used a 12" section of Stainless 2.5" square tube with UHMW shims on 4 sides to take up the slack. Match drill the hole for a 5/8" hitch pin with spring and Voila'. Works like a champ and allows me to launch and tow a little easier. About $40 total and strong. 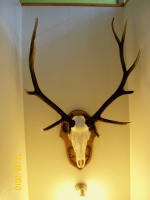 I'm thinking the same thing only to the extreme.
On the waterbug trailer I want to be able to drive on and to drive off.
Think Lowboy trailer on semis.
The tongue Will insert and extend from both ends of the trailer. Being a catrermeran the winch post will be short and I will drive over it.
I don't need to float the boat off so I will have a ramp that can be on the front or the back.
Good fix on yours, makes me more confident in my Idea.
Ever think you need a LONGER tongue ? Not for pulling of course but to get the boat out farther at a low water ramp.
You could carry an extra length of tube on the trailer just for that.

DO to the increasing cost of energy, Gas,and Electricity. The Down turn in the economy.
The light at the END of the TUNNEL is Now TURNED OFF!!!
Top

Never considered one so short, but it works well. Around here with our big tides and soft beaches at low tides, guys do the sleeve thing but with a 6'-10' sleeves to slide out and give a little more "reach" to the trailer when launching.
"Lay in the weeds and wait, and when you get your chance to say something, say something good."
Merle Haggard
Top

prconnection
I really need a life!

lsfmoose
I really need a life!

If it was me I would also box the outer parts of tongue where you cut tongue in half. Then not knowing thickness of insert I would use at least 1/4" wall thickness. Remember every time you hit a bump the joint will take a big hit.