I bought my OP220 a few weeks back and since ownership I noticed the gasoline smell, especially after refueling and in choppy water, it's a 24 mile boat ride home from the spit in Homer. After reading posts on this website concerning the same thing, I emailed Hewescraft to find out what size hoses the boat came with. Cari quickly responded with my hose specs and fuel tank specs, next I called Kachemak Gear shed ordered 1 1/2 inch fuel filler hose, 3/8 fuel hose, and 5/8 hose and new clamps. I was intimidated by the job initially as I have never done work like this before, however it wasn't hard at all. Two screwdrivers a hacksaw and Kabar knife was all I needed to do the job. I only had to pull the middle aft deck out, initially I thought I'd have to remove the entire decking inside the cabin but the hose at the front of the fuel tank could be reached without removing the decking so all in all it was an easy fix.
20200515_193749.jpg
First thing I had to do was take off the back panels that cover the batteries, fuel/water separator and washdown pump. Next remove the phillips screws holding the floor down.

20200515_191332.jpg
Removing the floor panel reveals the fuel tank and three hose connections. I believe all the hoses should have two clamps on each end. I have one clamp on the fuel sender hose and plan on adding a second clamp. I couldn't slide the hose on any farther as there seems to be a little build up on the barbs that I have to clean off first..

20200515_172516.jpg
Lots of zip ties need to be replaced. I have thin ones here but want to replace them with zip ties at least as wide was what was used so that'll have to wait until I get back to Homer also. Village life.


20200515_173209.jpg
The old fill hose was cracked and rotted pretty good. It was really flexible and just pulled right out. The smaller hoses were also flexible and pulled out easily. I did not see any abrasions or rot on the smaller hoses but replaced them anyways with new hoses.


20200515_175919.jpg
The new fill hose is not very flexible and I had to remove the washdown pump to feed enough hose through the opening at the rear in order to bend it over to the port side, then it was a feed an inch or two and tug an inch or two to get the hose to where it needed to be. Cari did not have the hose lengths and so I measured before having the hoses shipped over, I ordered twice as much fill hose, that was pretty costly as the hose is nearly 10 dollars a foot, note self, learn to measure!
20200515_180125.jpg
I used a hacksaw to cut the fill hose, I thought it would work as there are wires that run through the hose to keep it from collapsing. The hacksaw did not cut through the steel wire and I had to use some heavy duty snippers to cut the wires.


I have one more hose to replace, it runs from the front of the gas tank through the port gunwale back to the breather cap on the transom near the fill tube. That should only take a few minutes to run. I had a fair amount of gasoline under the decking that I managed to pump out with one of those long manual bilge pumps and a 5 gallon bucket. My plan is to get the boat back to Homer and on it's trailer. I want to take out the floors scrub down the boat under the floors and hopefully remove years of yuck and get rid of the gas odor. So far this is the only thing I have "had to do" to the boat and that wasn't such a big deal. I'm not sure if anyone else is facing this chore, but it takes a little time and effort but not a hard one at all.
You do not have the required permissions to view the files attached to this post.
2007 OP 220
Honda BF200 9.9 kicker
Raymarine Quantum 2 Radar
Axiom 9 100rv
Raymarine EV150 autopilot
Top 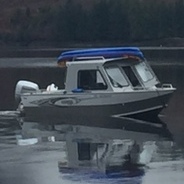 Thanks for taking the time to photo and upload. It makes this process seem easier to navigate.
Scott
2016 190 SR ET HT
BF150
BA15
Top

Good project, I did mine on my 1996 SeaRunner back in 2014 when I rehabbed the entire boat. One thing to make sure of is the fuel type rating for the hoses. Today's fuels can have ethanol in different blends depending on the time of the year and location where you get the fuel. The hose makers now offer hoses rated for ethanol-blended fuels because ethanol can eat a non-ethanol rated hose causing all sorts of issues with the fuel system. Ethanol rated hoses cost more but it's a marginal price difference and should be required these days. The hoses I bought had a green stripe on them that signified they were ethanol rated, but I don't know if that code is used by other hose makers or if it is a national requirement. I also replaced the drain lines for the fish boxes that drain out through the transom as mine had an issue and in the summer heat had shrunk enough to pull off the outlet barb creating an Oh Crap moment while at sea.
Top

.
Mine was rotted pretty much the same way.
Wasn’t leaking just yet.
Thank you for sharing..
Top

Looks like you changed those just in time! Nice work.
"Not what we have but what we enjoy, constitutes our abundance." - John Petit-Senn
Top

Question now that I have looked at your post. Should I install a Gasoline filter on these new fuel injected engines. I think I have answered my question just asking it. YES ! What filters are most of you using ?
2020 Pro-V 180 ET
Honda 115, Honda 8
Baystar Steering
Garmin 93SV
Scotty 1101, D/R
When not fishing chasing Pheasants with my GSP
Top

My advice is to follow your engine manufacturer's recommendation. Most Mercury engines are factory equipped with a water/fuel separating filter with a water in fuel sensor under the cowl and additional filters are not recommended.

If recommended by your engine manufacturer, an external fuel/water filter should be installed.